Who's afraid of
Woof Woof Woof ? 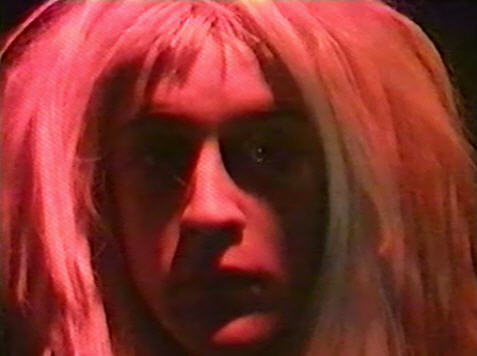 Two burned out drag queens come from Manchester to London on a last ditch attempt to resurrect their careers. One of them was once in a famous boy band and is named Tackal...He bares more than a passing resemblance to Kajagoogoo's Limal. At every opportunity he laments his massive fall from grace and sings 'Too shy, shy.' His boyfriend, who is a famous 'on the scene' drag queen is channeling Elizabeth Taylor in Butterfield 8. They are coming to meet a record producer and his sweet, shy tranny boyfriend and are desperate to get back in to Music Biz and get re-signed. Overwhelming ambition, ego, drugs and sex are all thrown in to the brew as the story follows closely Who's afraid of Virginia Woolf, but with a sharp bacchanalian twist. This film was shot in an empty gay club in London in 1991 with Punk legend Bertie Marshall and finished in 2008. It was inspired by Warhol's Women in Revolt and Who's Afraid of Virginia Woolf with a little Douglas Sirk thrown in to the recipe.....The film is hilarious, anarchic, surreal, dark and dangerous by turns. Like meeting the cast of Genet's Chant D'Amour at your local Walgreens. Dare you join their world of insanity and celebrity?